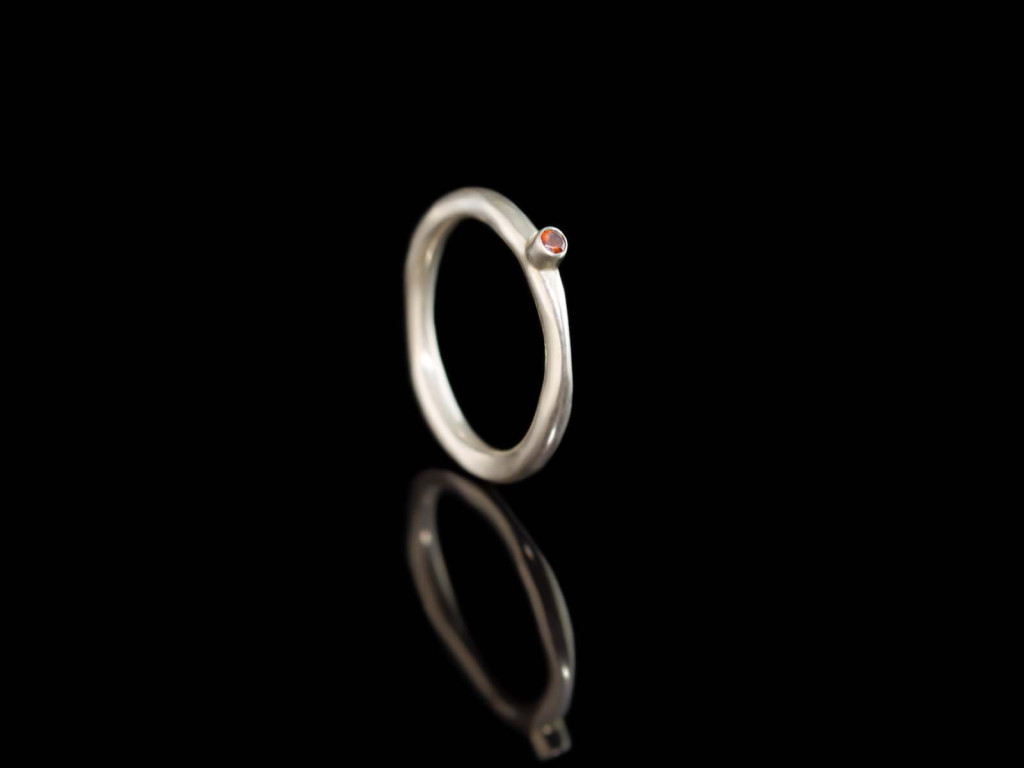 Elegant Sterling Silver Ring with a round small facetted Garnet set on a hammered shank.
The ring has been wrought into into its shape by hand which gives it that organic texture and natural appearance.
The name Garnet stems from its resemblance to the seeds of the fleshy seeds of the pomegranate fruit,
the colour of which is similar to the precious stone set in this ring.
They are very healthy and also make great ring holders for photos.
In other languages Garnet is called 'Granat', the same name as the fruit.
Slices of garnet have been used in windows in churches and temples,
and according to the legend, Noah has suspended a garnet in the ark in order to disperse light.
Garnet is said to cure melancholy and to warm the heart.
It also symbolises vitality in all its forms, such as strength and fertility.
Garnet is believed to have the power to bring success in business, fame and popularity, providing protection and bringing spiritual awareness.
Its powers include healing, strength, and it is often worn to relieve skin inflammations.
It also regulates the heart and blood flow and aid in curing depression.
It is also the gem to be given on a 2nd and 6th Wedding Anniversary.
Garnet is January's birthstone.
This ring is an P1/2, 56 mm (in circumference), European size a 16
and this is immediately available.
If you require a different ring size, I need about a week to alter the ring.
All my pieces are unique and when it comes to rings, you want to know the finger size, if it is for the ring finger, pointer, thumb, middle or the pinky, left or right or even for a toe.
In most cases rings can be adapted and resized.

YELLOW DOT | Elegant CITRINE polished Sterling Silver Ring
You’re looking at a sweet Sterling Silver Ring with a round small facetted Citrine set on a hammered shank. The ring has been wrought..
130€
Add to Cart
Add to Wish List Compare this Product
Question

RUBY TWIG | Sterling Silver ring
A vibrant, oval Ruby is embedded in this handcrafted twig ring that has been cast into solid Sterling Silver. The sheer beauty of nature&rs..
400€
Add to Cart
Add to Wish List Compare this Product
Question
Cookie notification
This website uses cookies to personalise content and ads, to provide social media features and to analyse its traffic. It might also share information about your use of this site with its social media, advertising and analytics partners who may combine it with other information that you’ve provided to them or that they’ve collected from your use of their services. Privacy policy