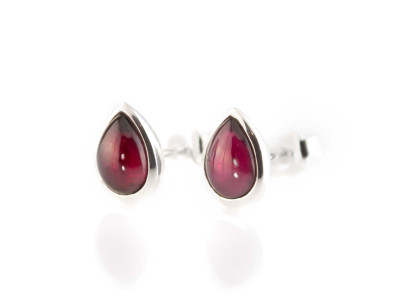 You're looking at dark red Rhodolite Garnet ear studs in the shape of eyes or drops.
They are handmade from Sterling Silver, smooth, shiny and elegant.
Rhodolite Garnet with shimmering brilliance and raspberry freshness has undertones of rose and plum.
It immediately lifts the spirits with exuberant excitement and looks excellent in the spring and summer.
The colour of these Garnets is almost black to dark red in colour and they exuberate a warm red glow when reflecting a light source.
The name 'Garnet' stems from its resemblance to the seeds of the fleshy seeds of the pomegranate fruit.
In other languages Garnet is called 'Granat', the same name as the fruit.
Garnet is said to cure melancholy and to warm the heart.

It also symbolises vitality in all its forms, such as strength and fertility.
Its powers include healing, strength, and it is often worn to relieve skin inflammations.
It also regulates the heart and blood flow and aid in curing depression.
Garnet is believed to have the power to bring success in business, fame and popularity, providing protection and bringing spiritual awareness.
Slices of Garnet have been used in windows in churches and temples,
and according to the legend, Noah has suspended a garnet in the ark in order to disperse light.
It is also the gem to be given on a 2nd and 6th Wedding Anniversary.
Garnet is January's birthstone.

Mandarin Garnet Eyes | ear studs drop shaped faceted | Sterling Silver (sold)
These Sterling Silver ear studs have the shape of eyes or drops and the most beautiful orange colour. As you can see there is a twist with these stud..
190€
Add to Cart
Add to Wish List Compare this Product
Question Custom order

Pomegarnet necklace | shiny Garnet drops | Sterling Silver clasp (Sold out)
This is a necklace made from fine smooth drops of Garnet. The colour is dark red to purple and orange in colour with some interesting inclusions..
124€
Add to Cart
Add to Wish List Compare this Product
Question Custom order

FACETS OF GARNET | Necklace with geometrical Sterling Silver applications (made to order)
Garnet necklace with 2 sizes of garnet spheres that have been facetted and polished for a sparkling effect. The colour of this Zambian is dark red to..
124€
Add to Cart
Add to Wish List Compare this Product
Question Custom order

Garnet in 2 chains bracelet | with geometrical Sterling Silver applications (Sold Out)
Double bracelet with facetted Garnet spheres and two different kinds of Sterling Silver chains, one with smaller and one with larger loops. ..
123€
Add to Cart
Add to Wish List Compare this Product
Question Custom order

RED DOT | Garnet Ring from hand wrought Sterling Silver (sold)
Elegant Sterling Silver Ring with a round small facetted Garnet set on a hammered shank. The ring has been wrought into into its shape by hand which ..
157€
Add to Cart
Add to Wish List Compare this Product
Question Custom order