GARNET ON A LEAF | Fine Silver Brooch (made to order) 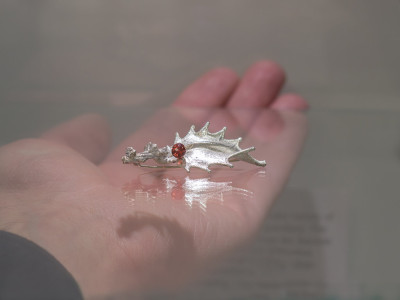 This is a brooch made of Fine Silver holding a beautifully faceted Garnet in AAA quality, made to order.

As worn by Paddy Mc Guinness on the Christmas Special on BBC One 'Even Better Than the Real Thing' on the 23rd December 2017.

It is the leaf of an Ilex, also known as Holly, transformed using electroforming and various silversmithing techniques.
This spiky evergreen leaf is mystical and symbolic at the same time.
In Christian belief a Holly’s thorns resemble the crown of thorns that Jesus had to wear
and germanic druids wore holly in their hair to protect them of evil.
A symbol of modern times, Harry Potter’s magic wand was made of course, out of the wood of a holly.
Interestingly, the name 'Holly' stems not from the word ‘Holy’, but from the word for ‘Hull’ or ‘husk’, basically ‘pulses’ describing its red pea shaped fruits in germanic.

The dark red precious stone Garnet also symbolises vitality in all its forms, such as strength and fertility.
It is believed to have the power to bring success in business, fame and popularity, providing protection and bringing spiritual awareness.
Slices of Garnet have been used in windows in churches and temples, and according to the legend, Noah has suspended a garnet in the ark in order to disperse light.
It is also the gem to be given on a 2nd and 6th Wedding Anniversary.
Garnet is January's birthstone.

Made to order for you. Please plan about 2 weeks lead time.

Gehaemmert - Sterling Silver hammered Brooch
This solid sterling silver Brooch is made with a 1mm thick Sheet of Sterling Silver. Annealed, forged, hammered and soldered into a an asymetrical sha..
118€
Ex Tax:118€
Add to Cart
Add to Wish List Compare this Product
Question

PANDA | Brooch-Pin made of Sterling Silver
Do you like Panda bears as much as I do?Then this handcrafted Sterling Silver brooch is is the perfect accessory for you.Handcarved ..
90€
Ex Tax:90€
Add to Cart
Add to Wish List Compare this Product
Question