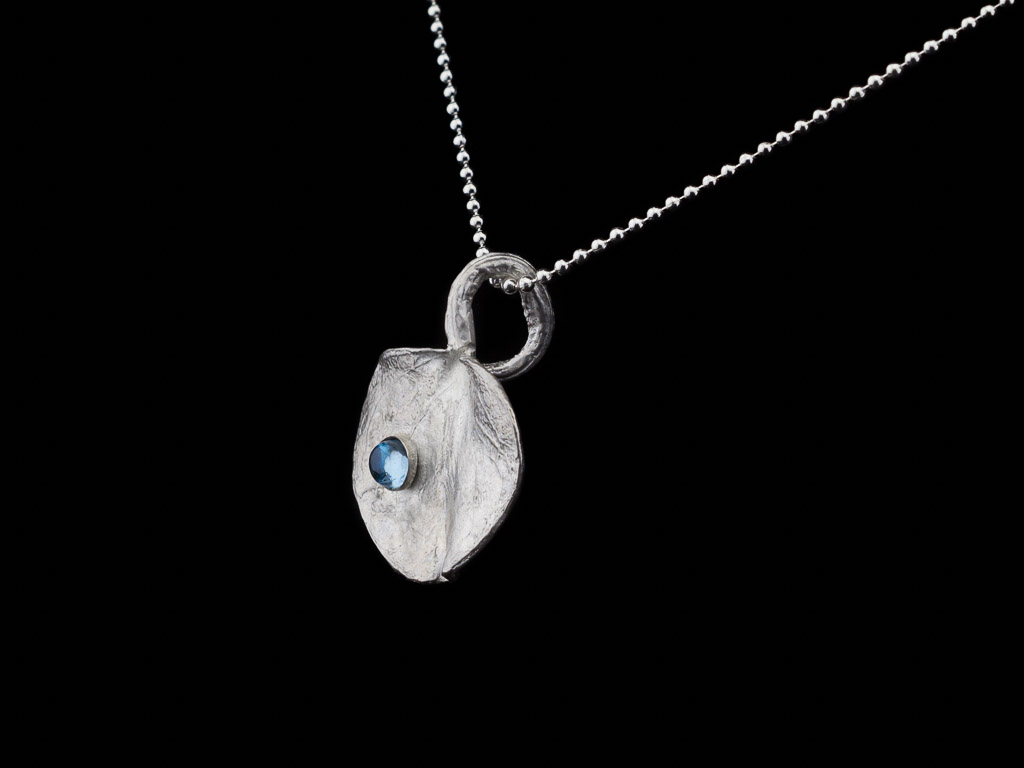 This Sterling Silver necklace features a Lily leaf holding a smooth round London Blue Topaz cabochon.
The leaf has been handcrafted from the original using a special technique in my workshop in Yorkshire.
It has an organic look and feel and natural surface structure.
The London Topaz has excellent Quality rating AAA.
Among the trade names for the various shades of blue are Sky Blue, Swiss Blue and London Blue.
The lightest of these shades is Sky Blue Topaz, which resembles a watery summer sky and the London Blue is a unique intense blue.
The pendant is suspended on a high quality ball chain.

Topaz is a semi-precious stone that has been used in jewellery for centuries, used in amulets of power and influence.
Its rarity has meant that it has become associated with glory and success.
The ancient Greek believed, this gem possessed the power to increase strength.
Today Topaz is used in alternative healing to treat insomnia, it stimulates blood circulation and increases appetite.
Probably the most famous Topaz is a colourless, clear one that originally was long thought to be a Diamond.
It is a 1680-carat stone known as the 'Braganca Diamond' that is set in the Portuguese Crown Jewels.
Topaz is traditionally given on 4th, 19th and 23rd Wedding days.

Measurements:
The Lily leaf is 25 mm long and 25 mm wide.
The Topaz is 4 mm in diameter.
The spheres of the necklace are 1 mm strong.

OPAL and CITRINE TWIG | Sterling Silver Necklace
Elaborate Necklace carrying a Silver Twig as pendant on a Silver chain. The twig can be worn horizontally and also sideways as shown in the images. ..
800€
Ex Tax:800€
Add to Cart
Add to Wish List Compare this Product
Question

AQUAMARINE BERYL | Necklace with white Topaz, Silver and Gold
This exclusive necklace is made from natural round faceted Beryl spheres which include stunning blue green Aquamarines. A centre piece of t..
1,300€
Ex Tax:1,300€
Add to Cart
Add to Wish List Compare this Product
Question

POPPYSEED HEADS | Sterling Silver earrings (made to order)
These earrings each feature a head of a natural poppy seed that has been cast by hand in solid Sterling Silver.They are natural seed pod..
150€
Ex Tax:150€
Add to Cart
Add to Wish List Compare this Product
Question