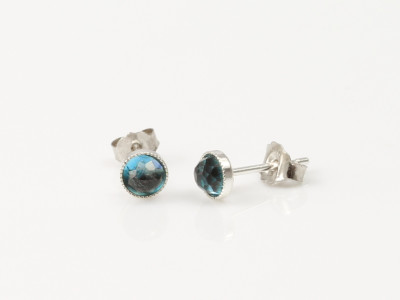 Great depth of colour, this shade of Prussian blue is not only elegant but flattering. These faceted stones have a neatly cut, and are polished to a high shine.

This precious stone has been used in jewellery for centuries, appearing in amulets of power and influence. Due to its rarity, this stone has become associated with glory and sucess. Usually thought of as a golden orange or yellow stone, topaz occurs in a wide range of colours, depending on the amount of iron or chromium it contains. Natural pink stones are rare, most pink topaz is heat treated yellow topaz. Much colourless topaz is irradiated and heat treated to a range of blues.

In the 17th century the Braganza diamond - 1,640cts - in the Portuguese crown was thought to be the largest diamond ever found. This was never confirmed and it is now believed to have been a colourless Topaz.