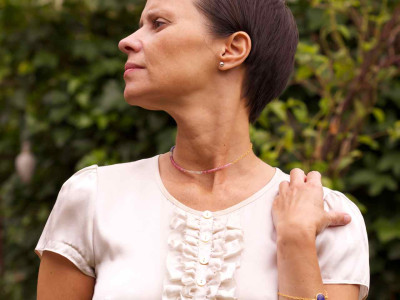 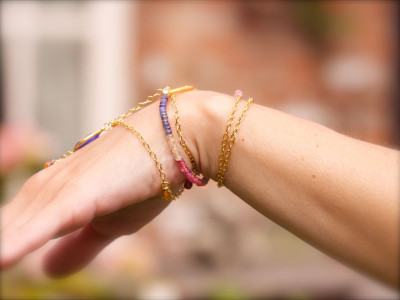 Handcrafted golden necklace with Sapphires in more colours than just blue.
I've used rare pink and rose sapphires together with almost clear ones
and it wasn't easy to find ones that allowed me to create this beautiful gradient
to the blue shades and then to dark blue.
On one end there is a large round facetted blue Ratnapuri Sapphire set in Gold followed by a golden leaf.
Sitting on this leaf I decided that the famous and most rare Padrapadscha in  a facetted drop shape would be the perfect fit.
The Padparadscha is an orange pinkish variety of Sapphire.
The necklace is very versatile. It can be worn in different ways as shown in the images due to the clever brushed gold loop
on one end: As a long necklace with variable length, as short necklace with shoulder
chain or as multiple bracelet.
Sapphire is known as the gem of the heaven and is also called 'the divine gem'.
The most popular colour variety is the true royal blue. Shades range from dark blue to bright blue.
But there are varieties of Sapphire that are golden to reddish orange and violets as well. Its symbolic meanings: faithfulness, sincerity and devotion, make it a popular choice on engagement rings.
The Sapphire is known to grant spiritual enlightenment, inner peace and courage, used to calm mental strain, strengthen bones and promote a healthy life.

The Sapphire is the Birthstone of the ones born in September.