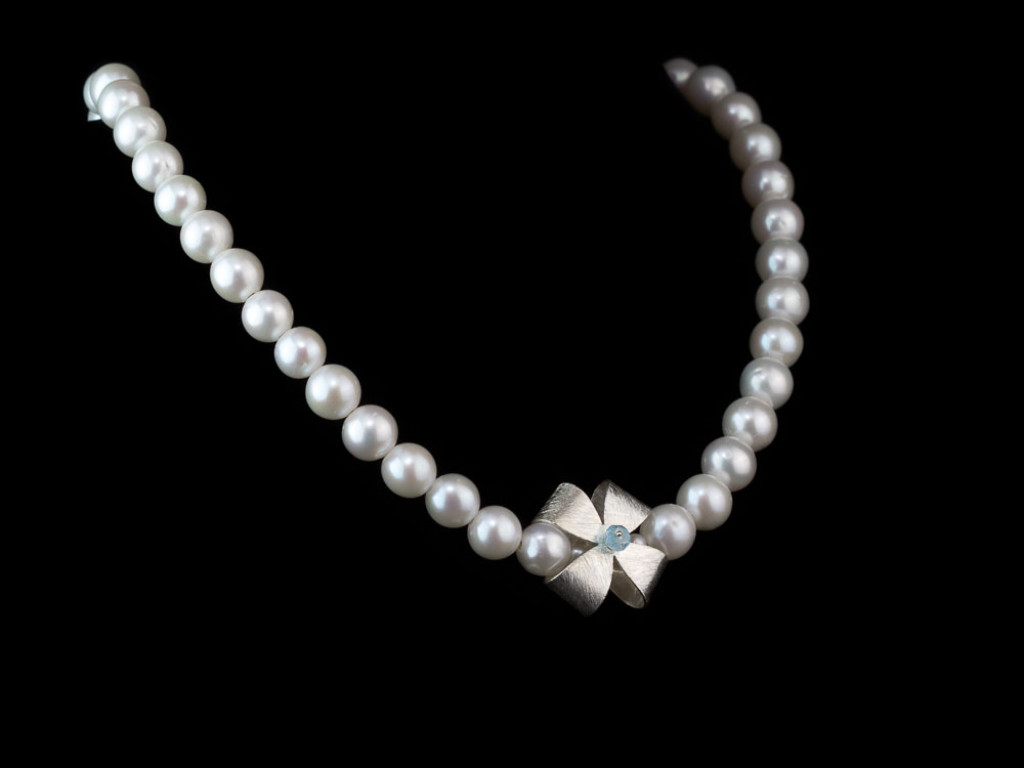 White Freshwater Pearls in the superior AAA quality make up this elegant necklace, it has been hand knotted using a natural silk cord.

The centre piece is a Victorian inspired ribbon bow made of brushed Sterling Silver that makes up a cross with a sparkling Sky Blue Topaz in the middle.

Ribbons and bows in all kinds of forms were very popular in the Victorian era and they are strong symbols for things coming together, being centred and intertwined.

The sparkling beauty of the Pearl has been cherished since the dawn of mankind.

According to the ancient Greek belief, Jewellery with a Pearl is capable of promoting marital bliss and eliminate emotional imbalances.

The technique to enhance Pearl forming in shells and oysters has been used since the year 1893.

A little object or tissue of a donor shell is implanted into the shell and around it forms a protective layer by layer and eventually a Pearl is formed.

These cultured pearls can then be harvested in a very sustainable way in harmony with nature.

The Pearl is a symbol of faithfulness integrity and wisdom.

It is also said to have calming qualities, too.

The Pearl is the birthstone for the ones born in June.

The Topaz is the birthstone of November.

Measurements: The necklace is 47 cm long, the ribbon bow is 23 mm across and the Topaz is 3.5mm.

TWISTED | Amber collier with Biwa Pearls
Lavish short necklace or collier made of beautifully smooth Amber and special white freshwater Biwa pearls, all of which are..
800€
Add to Cart
Add to Wish List Compare this Product
Question

JUICY AMAZON | Emerald Pearl necklace with Jade and Prase
This is a unique double necklace made of elegant facetted Emeralds and genuine freshwater Pearls. It features a handcrafted wrought pendant..
600€
Add to Cart
Add to Wish List Compare this Product
Question

Necklace with an Aquamarine cluster in a crystal matrix pendant cast in Sterling Silver
A translation from the formation of a gemstone. Inspired by the geology of gemstones I tried to replicate an Aquamarine Crystal Matrix. This ensemble ..
460€
Add to Cart
Add to Wish List Compare this Product
Question