TSAVORITE MEETS PERIDOT | Necklace in Sterling Silver (made to order) 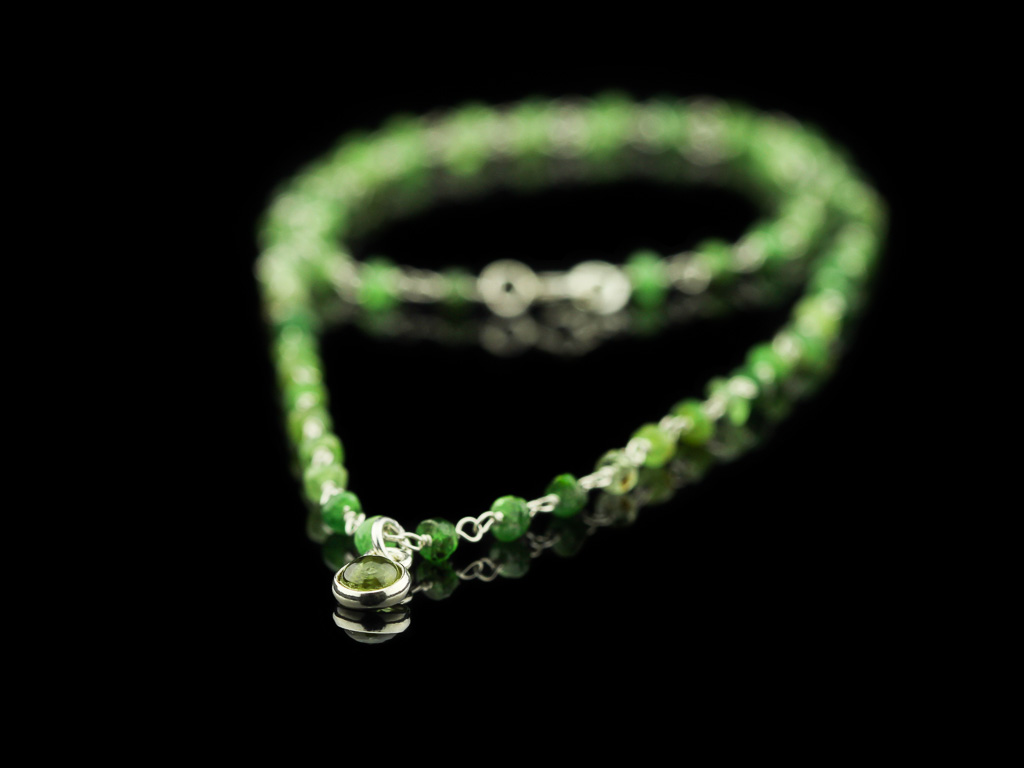 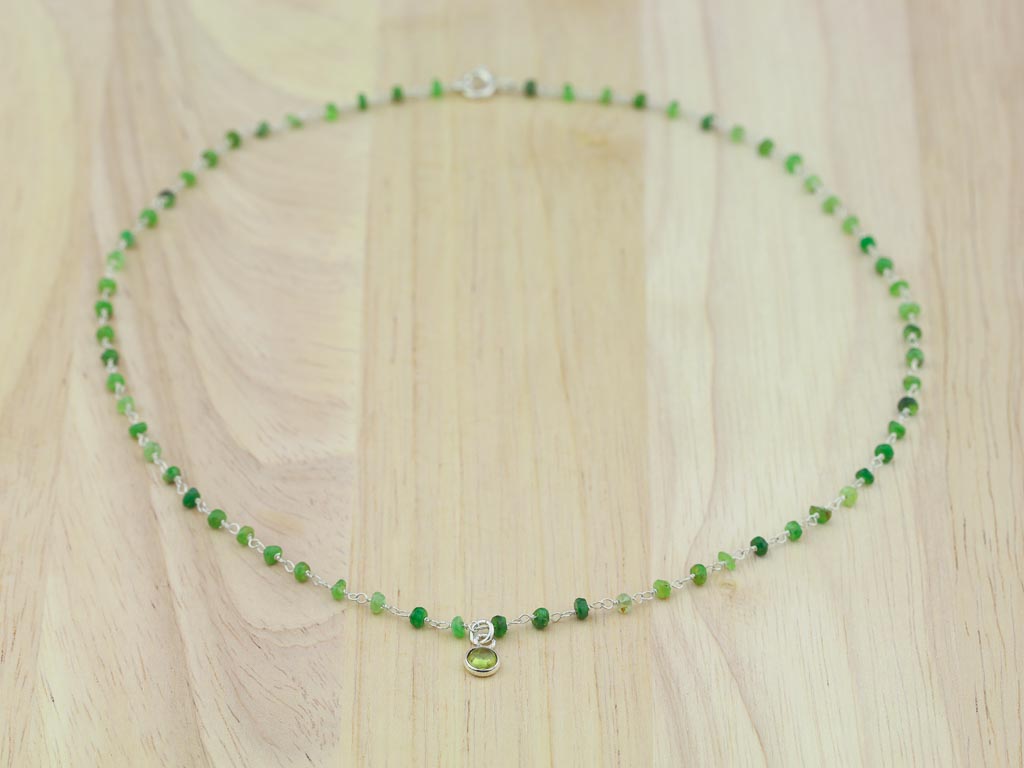 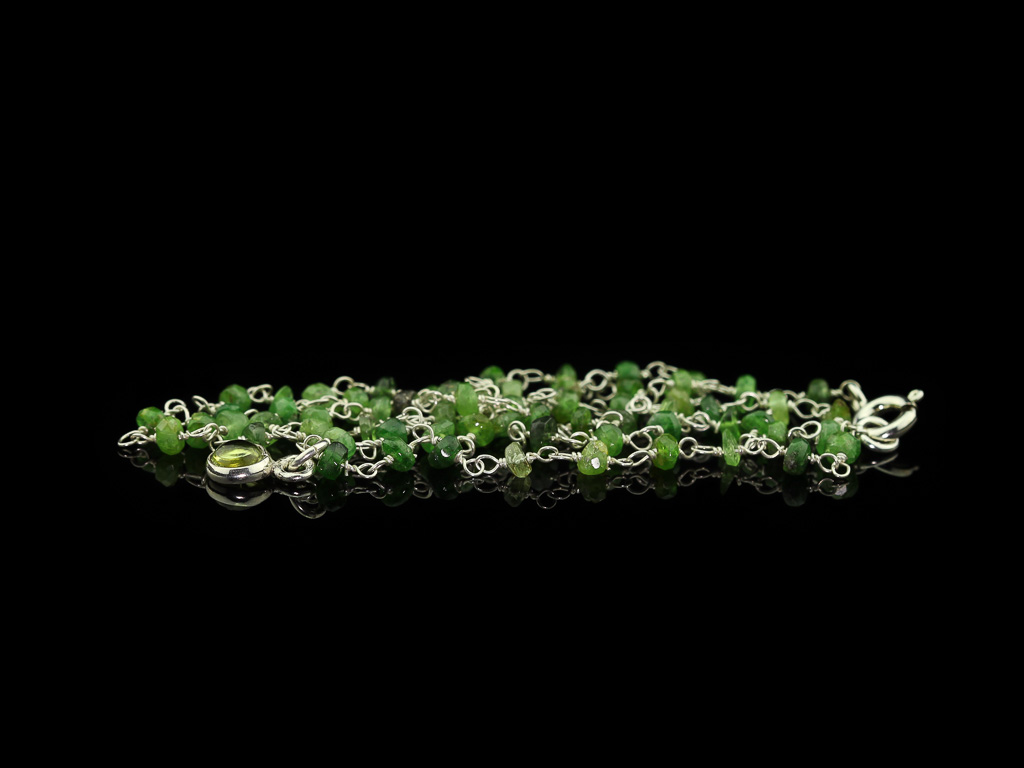 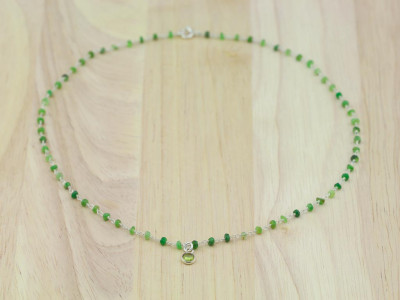 This necklace is full of faceted vivid green and shaded Tsavorite rondells in the exquisite quality AAA.
As centre piece it holds a round Cabochon, which is a beautiful grass green Peridot set in Sterling Silver.
Each Tsavorite is accompanied by elaborate Sterling Silver chain links.
Tsavorite is a rare green Form of Garnet.
Never heard of a green Garnet or the Tsavorite?

It was near the world-famous Tsavo National Park, in East-African bushland along the border between Kenya and Tanzania where it all began.
In 1967 the British geologist Campbell R. Bridges, was looking for gemstones in the mountains in the north-east of Tanzania.
He came across some strange nodules of rock. Inside these he found some beautiful green grains and crystal fragments.
What he had discovered was green grossularite, a mineral belonging to the colourful gemstone group of the Garnets, it was of an extraordinarily beautiful colour and good transparency.

What is it that makes the Tsavorite so desirable? It is its lively, radiant green.
The colour range of the Tsavorite includes a springlike light green, an intense blue-green and a deep forest green - colours which have a refreshing and invigorating effect on the senses.
However, this gemstone is also valuable on account of its great brilliance.
It has, like all the other garnets, a particularly high refractive index and hardness, which actually makes it count as a full precious stone, because its even harder than Emerald.

Like all the other Garnets it is not enhanced, nor would it need that - It's simply a piece of pure, unadulterated Nature.

Garnet is said to cure melancholy and to warm the heart.
It also symbolises vitality in all its forms, such as strength and fertility.
Its powers include healing, strength, and it is often worn to relieve skin inflammations.
Garnet is believed to have the power to bring success in business, fame and popularity, providing protection and bringing spiritual awareness.

It is also the gem to be given on a 2nd and 6th Wedding Anniversary.
Garnet is January's birthstone.

Peridot, on the other hand, is a lush green semi-precious stone that is the birthstone of August.
A Peridot doesn't get darker at night, consequently the Romans named it The Evening Emerald.
Did you know, the ancient Egytpians used it as currency and it was more valuable than Diamonds?
It is said that Cleopatra's favourite precious stone was actually not an Emerald but a Peridot.
Peridot is supposed to increase fidelity and love and is a symbol for truthfulness and friendship.
Peridot is said to be good for you if you want to become famous or successful in any way.
It belongs to the mineral family of the Olivines found in volcanic sediments and Meteors.

Measurements:
This necklace has a total length of 44 cm.
There are 46 Tsavorite roundels in total and they measure 3 mm in diameter.
The Peridot has a diameter of 4 mm and the pendant is 10 mm long.

JUICY AMAZON | Emerald Pearl necklace with Jade and Prase
This is a unique double necklace made of elegant facetted Emeralds and genuine freshwater Pearls. It features a handcrafted wrought pendant..
550€
Ex Tax:550€
Add to Cart
Add to Wish List Compare this Product
Question 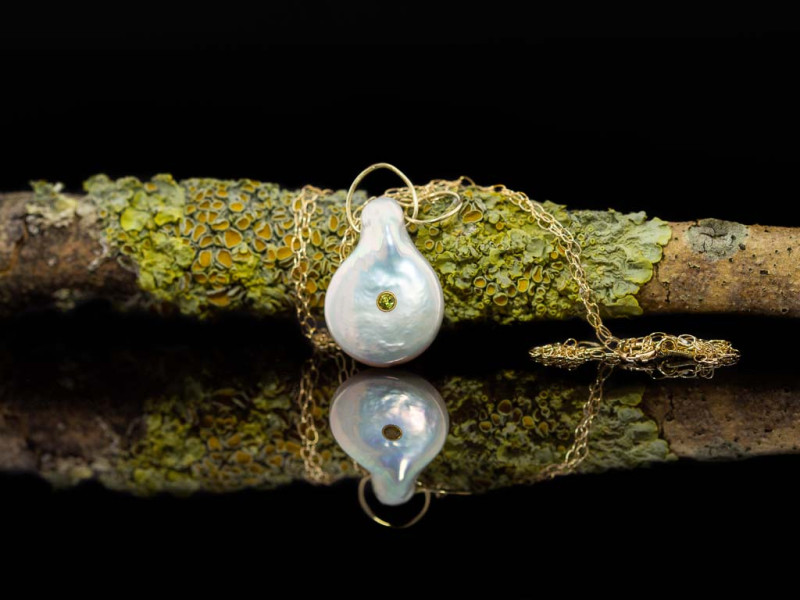