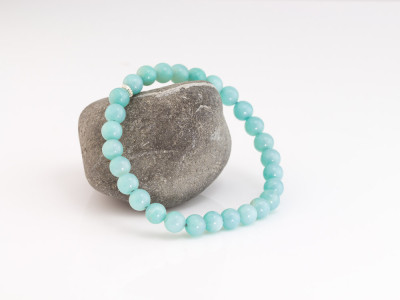 This is a sweet bracelet made of Blue Amazonite spheres that are nicely polished.

It has a handmade ring element with structured surface that adds to its elegance.

The bracelet is elastic and fits all wrists, it has a total length of 19cm all around, which is a diameter of 5.5cm round and unstretched.

The Amazonite Spheres have a diameter of 6mm each and have the superior quality AA.

Maybe there is some truth to the legend, the Amazones live in some secluded, never discovered hideaway or - are they are living among us...